There’s a story I’m sure we all know. Or, at least, we’ve heard of it. The one about the sandwich that started World War One. A man tries to kill the Archduke. He fails and, naturally, goes to have a sandwich. The Archduke’s motorcade happens to get lost and pass by that sandwich shop. One coincidence and two gunshots later, the world is plunged into war. Regardless of whether or not it actually happened that way, it’s a good story, isn’t it?

Stories are a powerful thing. They’re capable of shaping our truth. Consider history, for one thing. It’s just the stories we’re taught are most true, some of which can be evidenced and others that cannot. Sure, there’s objective truths, but what parts do we remember? What stories do we choose to tell? 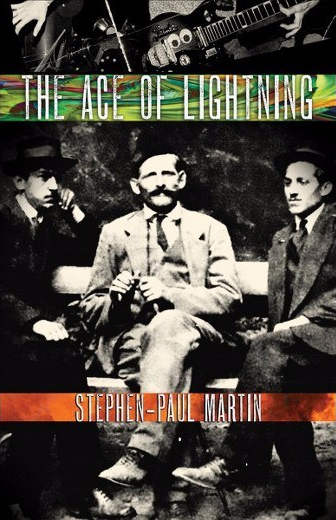 The guiding concept behind The Ace of Lightning is a relatively digestible one. It’s a series of short stories intertwined by reference and relationship to Gavrilo Princip, the man behind the sandwich. However, the execution of this idea is a profound complication of storytelling, truth, and history. Of these three wise subjects, Stephen-Paul Martin is a master. And whatever preconceived notion you have of this book, throw it away right now. You have no idea.

Stephen-Paul Martin is a prolific writer, to say the least. The Ace of Lightning is only the most recent of nearly twenty other books, including The Gothic Twilight, which was nominated for the National Critics Circle Fiction Award in 1993. He was a co-editor for Central Park, an internationally acclaimed journal of the arts & social commentary, for 16 years, and his writings have appeared in over 200 periodicals over the past 30 years, in several different languages. Currently, he is a professor at San Diego State University.

To explain at least one element of The Ace of Lightning, let me remind you of a little genre called historiographic metafiction. As returning readers may recall, I wrote an introduction to it elsewhere. Historiographic metafiction describes works of self-referential postmodern literature that experiment with the narrative of history, acknowledging that the written record is not only flawed, but deliciously malleable. I’ll admit, my appreciation of Martin’s epic may be a tinge biased: World War One is one of my favorite subjects. (I’m actually working on a book about it myself.) The Ace of Lightning, in some respects, acts as an exploration of all that was missed, questioned, or overlooked by its recorded history.

The narrative pencils in some of the lost moments in the life and times of Mr. Princip. The first story in the collection, “The Real Enemy”, details a conversation that may or may not have occurred between Princip and Danilo Ilic, another of the Black Hand, on the morning of the assassination. The last story, “Sandwiches”, bookends the work with another conversation in Princip’s life, this time at the fateful post-failure sandwich shop, with a woman he didn’t quite sleep with.

But wait, there’s so much more to it. Beyond Gavrilo Princip is a colorful cast of characters, sometimes recurring in other names and bodies and places, embroiled in plots of bizarre coincidences, sci-fi fantasies, and the truly inexplicable. Their stories and his mingle indiscriminately. “Writing Things Down” takes us through a chance meeting at a bustling marketplace between Princip and the Archduke three days before the assassination. They are photographed and the narrative absolutely dissolves.

The moment waits, as if it can’t figure out how to be the next moment, how to be more than a snapshot of itself, a photograph in a studio dark room slowly revealing a fragment of time, a bordered black and white space without sound and motion, later printed and published in a book, which turns up in a thrift shop thousands of miles away, having been translated several times and then gone out of print. It’s covered with dust and you get it for almost nothing. You’re eager to read a book that you’ve been trying to find for years.

When the dizzying image begins to coalesce into a concrete reality again, we are with a woman named Linda and experience a concert by the enigmatic band, “Assassination Sandwich”. In a similar vein, “Extraordinary Subjective States” begins as a description of Princip and Trifko’s insane fits of laughter while sheltering in a barn from the rain during a treacherous gun run across the Bosnian border (something the real life Princip mentioned during his trial). Over the course of a few paragraphs and a time-traveling cellphone, this transitions into Susan from San Diego going on a date with one man, co-opting his house after his disappearance, sleeping with another man from another story, and receiving a package from an alien.

This book does not f**k around.

Some of the stories have little to do with Princip’s lifetime at all, though he finds a way to creep into every narrative regardless. “Twilight Zone Episode” is a home invasion by a political murderess that turns out to be a title-invoking closed loop of events. “Therapy” is about dead dogs, a glowing brain, and ghost sightings. In “Because of The Wall”, a reality-disrupting wall appears in Central Park. And “More Dangerous” documents a murder prevented by a Steely Dan mixtape (that actually comes up earlier in a completely different story). As you can see, it’s a veritable cornucopia of subject matter.

“Possibly Everything” is perhaps the most technically intriguing of these narratives. It is a single, grammatically correct sentence spanning the length of 15 pages. A paranoid speaker touches on everything from the JFK assassination to Young Bosnia to conspiracy theories to second-hand accounts of sex on a blanket at a concert. This is only the second story in the book, but its final lines leave us with this perfect preparation for the rest:

I need to prepare myself, think about what to say in advance, the details I might need to invent, coming up with a story so compelling that even the most hard-boiled cops would want to keep listening, letting themselves be seduced by a verbal picture, a labyrinth of words they might never emerge from.

Color me seduced. (I’ve got a thing for labyrinths, don’t I?)

Certain markers continually crop up throughout these stories, interconnecting them with sign posts indicative of ground perhaps tread before. Among these are images of blackbirds, the middle finger, a morphing painting of a Dutch landscape, and wax sandwiches with an assassin’s face printed on one side and their victim on the other. If I may propose a more digestible format for understanding just how intensely convoluted this web of mythic symbols is, here is a slightly bonkers chart I’ve concocted of this interconnectivity. By no means is it conclusive in regards to listing all the recurring motifs, but I hope that it at the very least is a better visualization.

Every time one of these symbols pops up in the text, there’s this excitement to it that leaves you feeling both irreverently clever and totally humbled with awe. Martin’s writing is weaves a tight narrative with no room for error or escape. It’s quick. It’s sharp. It doesn’t wait for you to catch up to it. It’s dizzying with the constriction of air and, much like in erotic asphyxiation, you’re turned on and you want more.
Moving from the microcosm to the macrocosm, The Ace of Lightning questions the validity of storytelling. Constantly, the book is establishing truths, then breaking them. It shows us one version of events, then traipses behind the curtain and shows us the other. Its characters do this, its history does this, its story does this. Martin asks what is more important: the objective truth of the matter, or how satisfying the lie is? I cannot even recall how many times I have repeated back the story of the sandwich that killed dear Ferdinand, presenting it as factual truth.

All evidence is anecdotal. All evidence is perspective. And some things, my friends, are absolutely incomprehensible. This book? It might explain a thing or two.